Zagreb, 14 April – The closing session of the second UN Academy programme titled “The UN and Climate Change” was held today at the Ministry of Foreign Affairs and European Integration (MFAEI). The UN Academy was organised by the Croatian United Nations Association and the Diplomatic Academy of the MFAEI, with the support the U.S. Embassy in the Republic of Croatia.

The panel focused on current issues of climate change and the possible role of the UN in combating them. Participants of the panel were Dennis Tirpak, one of the leading authors of the Intergovernmental Panel on Climate Change (IPCC) and an associate of the Canadian International Institute for Sustainable Development, Matt Spannagle, UNDP’s expert on climate change, and H.E. David Blunt, Ambassador of the United Kingdom of Great Britain and Northern Ireland to the Republic of Croatia. Panelists warned of the dangers that threaten humanity, should the trend of growth of CO2 emissions not be halted and necessary measures to stop global warming below the 2 degrees Celsius not taken.

Dennis Tirpak presented scientific data that conclusively show that in the last four centuries there has been a significant growth in emissions caused by human influence and that the significant increase in emission coincides with the beginning of the industrial revolution. “While the average level of CO2 emissions by the beginning of the industrial revolution was an average of 280 ppmv, the concentration of CO2 recorded in March 2011 in Mauna Loi was as much as 392.4 ppmv,” Tirpak said. He also touched upon the existing UN regulations in this area and pointed to the challenges faced by states and international organizations in dealing with this issue.

Matt Spannagle commented on the role and work of UN agencies in the area of ​​climate change, both in Croatia and abroad. “The problem of climate change is a huge problem and a threat which the world has to face as soon as possible. The forecasts are not good and that is the bad news. But the good news is that the world now has the knowledge and technology to deal with this problem,” said Spannagle. He rated the role of UN agencies as positive, primarily because of their independence from the potential particular interests of the private sector or government agencies. But he also added that there is room for improvement and that the UN is as strong as its Member States are.

The British Ambassador to Croatia, Ambassador David Blunt, in his presentation pointed out that the successful response to climate change is one of the central objectives of British policy. “It is important to start with ourselves. We at the British Embassy have already done it,” he said, presenting the energy efficiency project, which brought the level of electricity consumption at the Embassy down by 30% in one year.

At the end of the panel, Joško Klisović, President of the United Nations Association, Dr. Mladen Andrlić, Head of the Diplomatic Academy of the MFAEI and Hee Hoyt, Counsellor at the Embassy of the United States, presented certificates of attendance of the UN Academy to this year’s participants – a total of 25 participants chosen on the basis of a public call for applications. 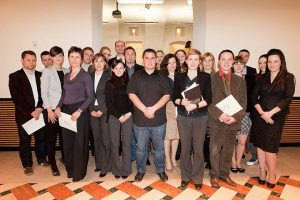 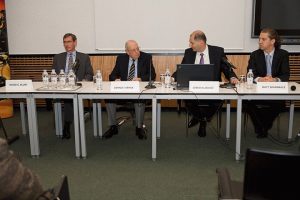 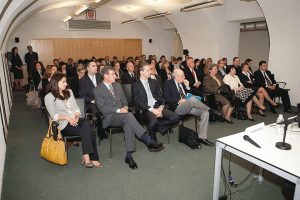