In the opening speech Ana Brnčić, Vice-president of the United Nations Associations stated: ”We believe that the UN Academy, organized by the United Nations Associations for the third time this year, contributes to widening knowledge about the UN in Croatia. In long term, it also increases the capacity of the Republic of Croatia to participate in the decision-making process about current global challenges”.

The first lecture, an introduction to the United Nations system, was held by Mr Joško Klisović, Deputy Minister at the Ministry of Foreign and European Affairs.

The participants, more than 25 of them, were selected through a public call for applications among more than 200 candidates. They will have the opportunity to get to know the United Nations system, its role in the field of international relations and its importance in dealing with current global challenges such as the maintenance of peace and security, the fight against poverty, the affirmation of human rights, etc. Besides the general part of the program, which provides insight into the basic structures and bodies of the United Nations, a special block of lectures will be devoted to the international financial system.

Lecturers in the program are leading Croatian experts and practitioners of international relations, with extensive experience with the UN system. 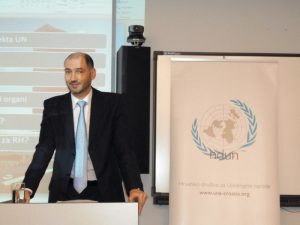