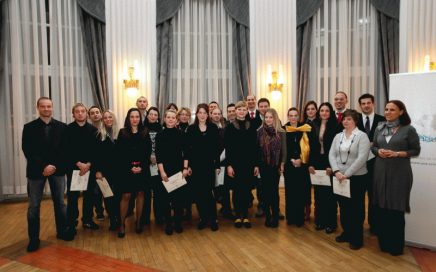 The closing panel “Dynamics of UN – EU – NATO – RoC relations” and the certificate awarding ceremony of the first cycle of the UN Academy educational programme took place on Wednesday, December 16, in the premises of the Croatian Journalists’ Association. Participants of the closing panel were H.E. James Foley, Ambassador of the United […]

As a part of United Nations 64th anniversary celebrations on the 24th October, the UN agencies located in Zagreb, in partnership with the Association of Croatian Eco-Agricultural producers, celebrated the UN Day with a 3rd fair of ecological produce – EKO FEST. The fair was held on Friday and Saturday, 23rd and 24th October 2009 […]

On the occasion of the international Human Rights Day, which marks the 61st anniversary of the Universal Declaration of Human Rights, Secretary General of the UN Ban Ki-Moon, commented on the fight against discrimination which is this year´s topic. No country is free of discrimination. We see it everywhere, in many forms: old and new, […]

The Security Council in Croatia

Zagreb, 22. May 2009. On the occasion of the 17th anniversary of Croatia’s admission to the United Nations and the first anniversary of its activity, the Croatian United Nations Association organised on May 21 a simulation of the work of the UN Security Council on the topic of fight against piracy. The event, which gathered […]

Darfur after ouster of aid groups

UN News center: March 13th 2009 After ouster of aid groups from Darfur, UN focuses on minimizing immediate risks. The United Nations system is focusing on the immediate risks posed to the 4.7 million people dependent on humanitarian aid in Sudan’s war-racked Darfur region after the ordered expulsion of 13 aid groups, a spokesperson for […]

WFUNA Newsletter: March 2009. In a speech to his fellow Ghanaians in the early 1900s, the visionary educator, Dr. J.E. Kwegyir Aggrey, declared, “The surest way to keep a people down is to educate the men and neglect the women. If you educate a man you simply educate an individual, but if you educate a […]

Overview on the democracy

WFUNA Newsletter: February 2009. On the first International Day of Democracy, 15 September 2008, Secretary General Ban Ki-moon said in his statement to the General Assembly that support of democracy is a central mission of the UN because “…the experience has taught us, time and again, that democracy is essential to achieving our fundamental goals […]